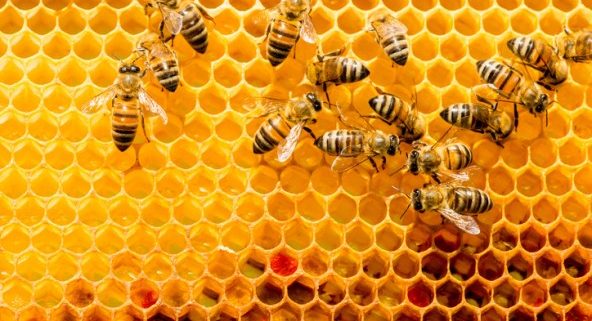 The healthiest product of Nature.

Provence honey is protected by a red label associated with a PGI for both all-flower honey and lavender and lavandin honey.

Since November 14, 2005, IGP Miel de Provence has been registered in the European directory of PGIs and PDOs. Since that day, the Provence appellation for honey is protected and is reserved for operators who respect the PGI specifications.

The Provence-Alpes-Côte d’Azur region has a large number of professional beekeepers: more than 300 beekeepers with more than 150 hives. Regional production is 2,000 T / year or 8% of the national production. Many of them practice transhumance along a route from the coast to Haute-Provence, via the Southern Alps.

In Provence, summer is the preferred season for the production of lavender honey.

But many other honeys are produced by these beekeepers in the scrubland (honeys of rosemary, thyme) or in the maquis (heather, strawberry …). The honey of Provence gained its notoriety from the 15th century. This is the period when he knows an important development thanks to the demand of the Italian merchants who considered then it like the “best of the good honeys”. Its quality and prestige remains intact to the point that it resists for a very long time the massive consumption of sugar. It was during the twentieth century that honeys harvested in the regions of Grasse, Brignoles, the Provençal Alps, Mont Ventoux or Barcelonnette, forged a reputation for quality that allowed them to obtain the PGI in 2005.

For example, in the Lure mountain, the family apiary has a long tradition. It provided both an income supplement and it was the only way to sweeten. Until the middle of the twentieth century, hives were planted in hollow tree trunks “les bruscs” and their number varied according to the swarms harvested in the spring since each harvest of honey killed the bees. It was an all-flower honey that was used to sweeten drinks, make cakes, prepare nougat, confit fruit or make ointments. The drug-dealers of Lure brought wax and honey into their medicinal preparations. But wax was also used to encaustic furniture, its surplus is sold to carpenters and cabinetmakers or devoted to making candles and candles.

Beekeeping will be transformed in the 1920s with the cultivation of wild lavender and lavandin. Then by the gradual replacement during the 1930s of bruscs by hives with frames. From then on, the transhumance of apiaries in the lavender fields became one of the characteristics of Provencal beekeeping.

Several flowers of Provence are famous for the quality of the honey that they generate:

Lavender and Lavandin produce a pale and thick honey.

Thyme. His honey is very dark and very strong.

Rosemary. It gives an ivory honey with enchanting scents.

The Linden. It is a specialty of the Montagne de Lure (04).

The sweetening power of honey, one of the 5 sources of sugar, and, with fruit, the most natural, making honey say “the healthiest product of Nature”.